After medical school, he completed his Internship in Medicine at Yale in 2000 and was awarded Intern of the Year. He was also the recipient of a research based award for the American Society of Clinical Oncology (Best of ASCO 2003), and Radiological Society of North America Roentgen Resident - Fellow Research award for 2003.

He completed his residency at Yale in 2004 in the Department of Radiation Oncology. He started an academic career as Assistant Professor at Yale School of Medicine, Department of Therapeutic Radiology. During this time, his focus was treating adult and pediatric cancer patients with a clinical interest in prostate cancer, lung cancer, thyroid cancer, head & neck cancer, and ocular melanoma. He was also involved in teaching medical students & residents, and involved in multiple academic committees and advisory boards.

Dr. Colasanto is a Board Certified Radiation Oncologist who currently practices general radiation oncology of all adult cancer patients, with an emphasis on breast cancer, skin cancer, gastrointestinal cancer, lung cancer, prostate cancer, head & neck cancer and palliative care. Dr. Colasanto is committed to delivering the most advanced radiation techniques to his patients while respecting the non-medical needs of his patients with a kind and comforting approach.

On a personal note, Dr. Colasanto and his family have a love of the outdoors with day hiking in New England and boardgaming. 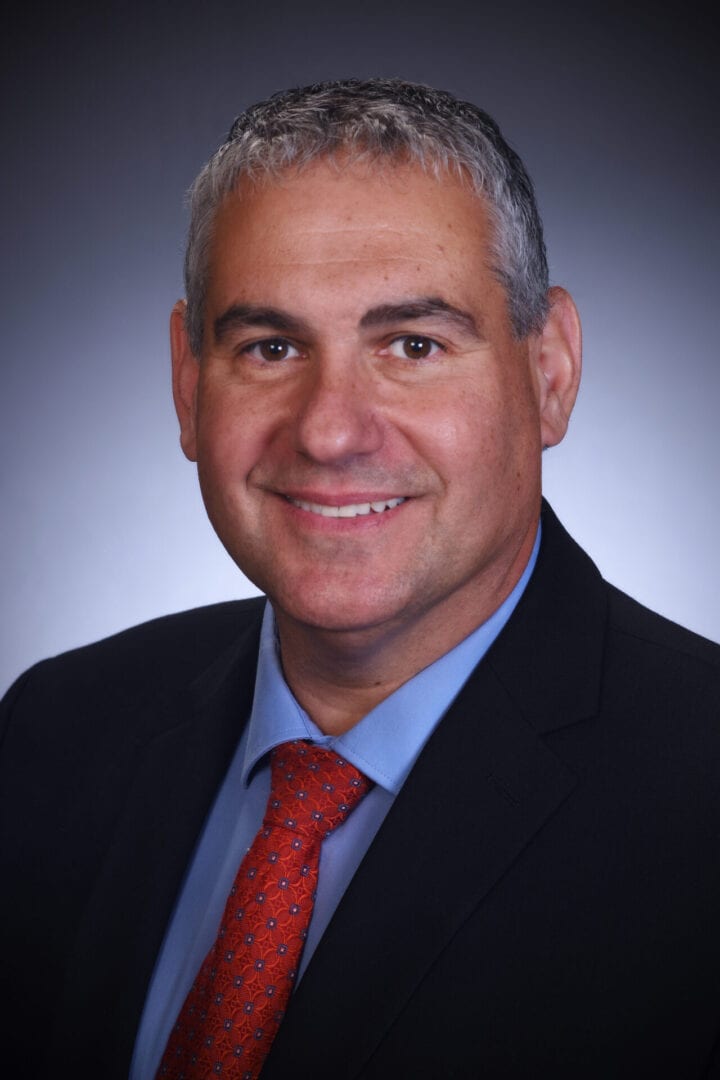 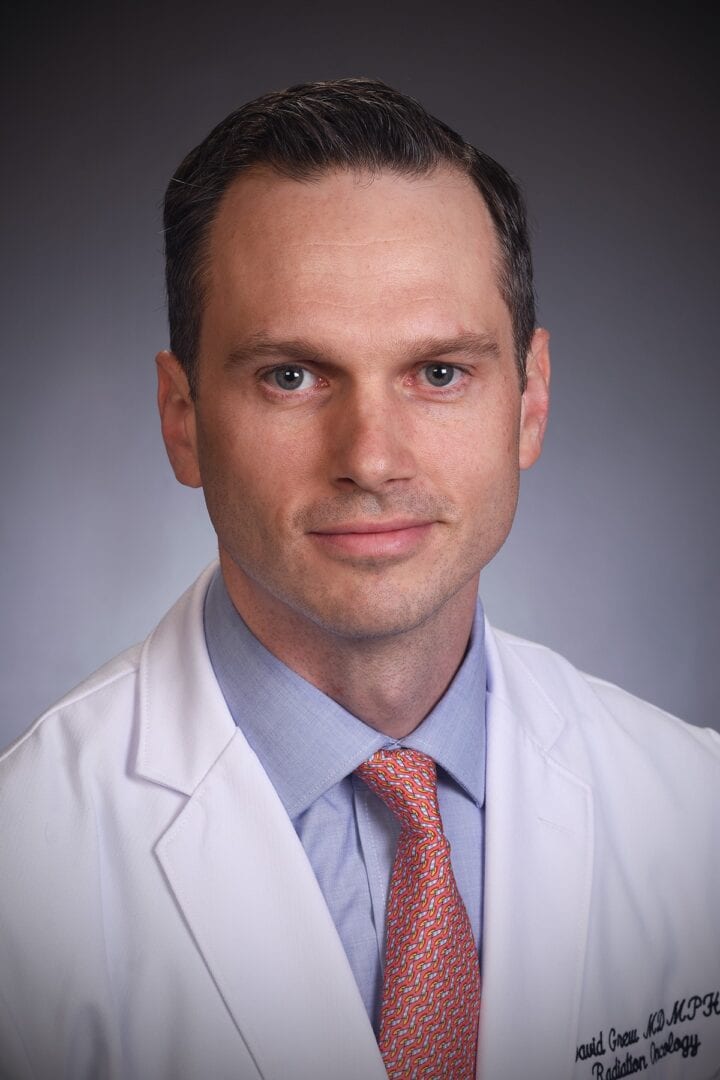 After college, he pursued an MPH from Tulane School of Public Health and Tropical Medicine. While there, he worked with the New Orleans Health Department to study the mid-term effects of Hurricane Katrina on New Orleans' health systems. He presented this work at national scientific meetings and published in peer-reviewed journals, which resulted in numerous federal grants flowing to the City of New Orleans to aid in the recovery effort. He attended Tulane School of Medicine where he earned his MD. At Tulane, Dr. Grew was awarded the Jack Aron MD/MPH scholarship and the Gold Humanism in Medicine Award. He did his residency training in Radiation Oncology at NYU School of Medicine where he served as chief resident and was awarded Resident of the Year in 2015. During residency, he performed research on a range of cancers, including lung, head and neck, gastrointestinal, breast and prostate cancer, as well as disaster preparedness and management in Radiation Oncology. He presented his work at numerous international scientific meetings and published in peer-reviewed journals.

Dr. Grew practices both at Johnson Memorial Cancer Center in Enfield, CT as well as St Francis Hospital in Hartford, CT. In 2019 he began serving as Co-Chair of the Cancer Committee at St Francis. He continues to perform research in radiation oncology and present his work both at regional and national meetings on a variety of topics including Cyberknife stereotactic radiation for prostate, liver and pancreatic tumors. His philosophy of medicine includes teaching his patients about their disease and laying out his plan to address their cancer problem. Dr. Grew enjoys the journey of establishing a personal connection with each individual patient.

Outside of work, Dr. Grew enjoys spending time with his wife and 4 daughters. Together, they are avid skiers, bikers and boaters.

At the conclusion of Dr. Shumway’s Internship at the Portsmouth Naval Hospital in Portsmouth, VA, he received specialty training in Radiation Oncology at SUNY Health Science Center in Syracuse, NY where he served as Chief Resident. Following completion of his specialty training, he was then on active duty with the U.S. Navy, serving as a physician in the Radiation Oncology Department at the San Diego Naval Hospital at the rank of Lieutenant Commander. He then returned to his New England roots, and has been practicing Radiation Oncology at Saint Francis Hospital in Hartford, CT since 1991.

Dr Shumway is an original co-founder of Connecticut Radiation Oncology, P.C., the physician group which provides exclusive Radiation Oncology services to Saint Francis Hospital. He helped to pioneer the introduction of new, innovative radiation therapy techniques to the greater Hartford area, including IMRT, IGRT, Stereotactic Radiosurgery, and brachytherapy. He is one of the most experienced physicians in Connecticut to offer brachytherapy (radioactive seed implant) for prostate cancer.

Dr. Shumway is the former Medical Director of Radiation Oncology at Saint Francis Hospital, and has been the Medical Director of the Connecticut CyberKnife Center at Saint Francis since its inception in 2006. He is one the most experienced physicians in the entire Northeast in performing CyberKnife stereotactic radiation for cancers of the lung, prostate, brain, liver and pancreas. He has been named “Top Doc” in the Greater Hartford area and in the State of Connecticut numerous times over the years. He strongly believes in giving his patients as much time as needed to help them through their treatments, as well as emphasizing compassion and understanding.

Outside of work, Dr Shumway enjoys playing tennis, vegetable gardening, as well as travelling, hiking and exploring new destinations around the globe with his wife. 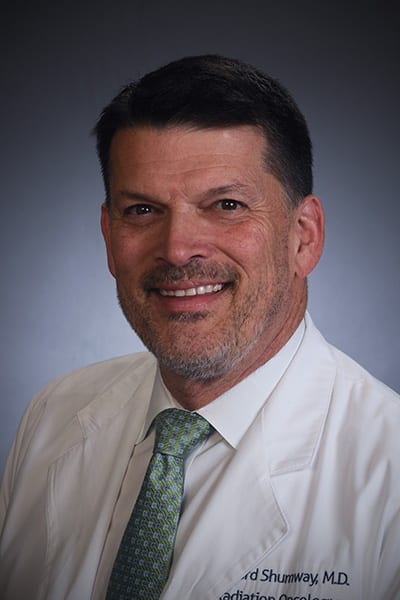 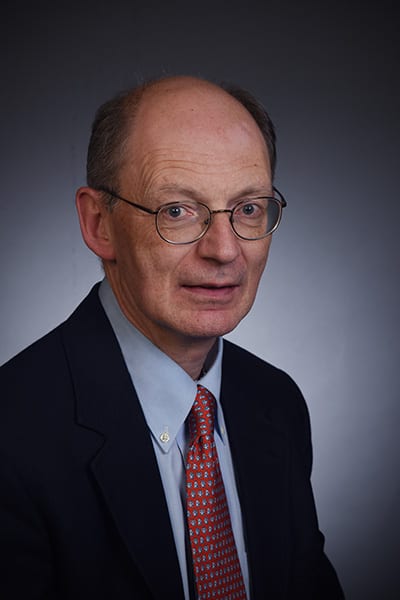 Office Location: Hartford
Dr. van Rooy earned his undergraduate degree in Biochemistry and Forestry from Syracuse University in 1985. He pursued and obtained in 1989, his doctorate in Medicine at the SUNY-Health Science Center in Syracuse, NY.
Following an internship at the Yale University-New Haven Medical Center, he completed his residency in Radiation Oncology at the SUNY-Health Science Center in Syracuse in 1994, where he was chief resident and an American Cancer Society – Clinical Oncology Fellow. He became Board Certified in Radiation Oncology in 1996.

Having completed his training in Upstate New York, he returned home to Connecticut and joined this practice in 1994. He has been affiliated with St Francis Hospital for more than 25 years and has been the the Medical Director of the Department of Radiation Oncology since 2008. Although he dedicates the majority of his time to the clinical care of oncology patients, his other duties include overseeing the Quality Assurance and Accreditation programs, participating in Multidisciplinary Management conferences, and being on the Advisory Board of the Trinity Breast and GYN Cancer Programs. He is involved in mentoring and teaching medical students and residents.

Dr. van Rooy is committed to the delivery of the highest quality of care with advanced and cutting edge technologies. He takes the time to listen to his patients to help them realize the best achievable results. He has been named “Best Doctor” and featured in Connecticut Magazine numerous times.
On a personal level, Dr. van Rooy and his family appreciate and value the outdoors, enjoying hiking, biking and gardening.